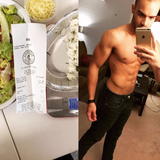 When you think of dieting and losing weight, 366 days of consuming Chipotle doesn’t typically come to mind. But for David Cunningham, Chipotle is his life.

Cunningham is currently on a yearlong quest to prove you can consume the foods you love while still maintaining your health and weight. He set out on a mission to eat Chipotle for 366 days while staying in shape by monitoring portion size and frequently exercising. His initial goal when starting his challenge was to gain weight. He told his local news that he ate doubled portions of meat, guacamole, rice, and salsa. He also thoroughly documents his meals and receipts on Instagram.

At the start of his challenge, David successfully gained 16 pounds, bringing his body weight to 172 pounds. Then he worked to chisel his body and lower his weight. He had Chipotle package parts of his meals separately so he could control his portions by measuring and weighing them at home. By incorporating exercise into his routine, David has since dropped from his initial weight of 172 to 146 pounds.

He is currently approaching his 315th day on his challenge, but it hasn’t all been completely smooth sailing. His diet was nearly derailed during Chipotle’s E. coli outbreak. Instead of replacing his meals, David ended up driving to British Columbia, Canada – twice – to stock up on ingredients from the chain to eat over the course of the scare.

While you’re probably wondering how someone can eat the same meal every day for an entire year (without going bonkers), David’s answer to that is simple. He told Fox 31 Denver that Chipotle’s menu variety makes it easy to switch up his meals so that he isn’t fed up.

This isn’t the first fast-food-indulgent diet we’ve seen, though; last year, Florida cyclist Matt McClellan made headlines for losing 24 pounds in one month by feasting solely on pizza.

While David’s decision to indulge in the chain’s offerings daily may be far fetched for many, he encourages people on a dieting journey to enjoy the foods you love in moderation to truly achieve your goals. Check out some of his snaps below, and follow the remainder of his challenge on Facebook and Instagram.

Day 244/366 What your body looks like after 244 straight days of Chipotle @chipotlemexicangrill #366daysofchipotle #Chipotle #chipotlife #chipotlelife #chicutle Thanks for the meal comp today! I’m 2/3rds done with this challenge today and 1/3rd of the way through my cut! Hopefully I’ll be around 9-10% body fat by the end of April.