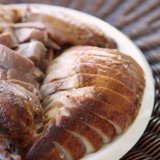 Rest assured, your turkey can be served as is, but the rest of the traditional Thanksgiving menu is not Paleo-diet friendly. If one or more of your guests live by these caveman rules of eating, a typical Thanksgiving table can seem like a danger zone. Learn which traditional dishes are hands-off for the Paleo set, and how you can make them enjoyable to every seat in the house.