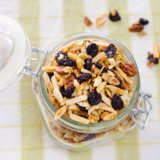 The following post was originally featured on Cook Eat Paleo and written by Lisa Wells, who is part of POPSUGAR Select Fitness.

I was craving granola this morning and this cherry almond Paleo granola was inspired by what I had in the house – dried cherries, almonds, coconut and vanilla. Cherry and almond are a classic flavor combination that works really well together. And with vanilla, honey and coconut, it’s delicious.

I used unsweetened dried tart cherries for this recipe and they are very tart. I like tart cherries, but if you don’t this granola would work equally well with sweet cherries. Or you could to swap out half of the tart cherries for golden raisins. The raisins would add a little more sweetness to balance out the tartness of the cherries. The pecans and sunflower seeds round out the granola and add extra crunch.

Cherry almond Paleo granola is a great gluten-free breakfast or snack. Topped with coconut milk or homemade cashew milk, it’s a healthy granola cereal. This quick and easy Paleo granola recipe is gluten-free, grain-free, refined sugar-free, and hard to resist. I keep it in a jar hidden in the cabinet so it doesn’t get eaten too quickly. It’s that addictive.