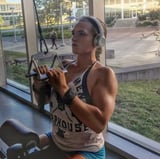 An Imgur post about the conflation of gym culture and body shaming is going viral for all the right reasons. The post, shared by a frequent gym attendee, discusses the many ways in which people at the gym make assumptions about others based on their appearances.

The user introduced the post by expressing her own experience with feeling judged. She wrote, “When Chris and I first started working out at the Rec, we were judged hardcore.” She added that she was being judged for seeming too confident and wearing a weightlifting belt, which she explained was something she had to wear following a back surgery.

The rest of the poignant story details the way in which people tend to judge or shame other people at the gym despite not knowing them or knowing their history.

The post currently has over 350,000 views. Read the necessary wake-up call in its entirety, below.

Body shaming at the gym

“When Chris & I first started working out at the Rec, we were judged hardcore. Someone even posted on Facebook about the “buff couple” & how they “thought they’re hot shit because they wear their belts all the time”. This was about two months after my back surgery & I did indeed wear my lifting belt during almost all of my workouts for support.

My point is, everyone gets judged. People don’t bother to understand where you’re coming from or why you do the things you do.

That overweight guy? Someone judges him because of his weight, but little do they know he’s already lost 100 pounds & has changed his entire life around.

That skinny girl you think “really needs to eat”? She’s actually super self conscious about her thin figure & has been trying to gain weight, but her metabolism is super high.

That kid who follows you around & watches everything you do? He looks up to you and wants to learn your workouts, he’s just scared to approach you.

That girl with really bad form? She had to mentally prepare to enter the weight room because she was terrified of people judging her. She second guesses every exercise, but she’s too intimidated to ask anyone for advice.

That buff dude you think is cocky? He grew up in poverty and working out was his alternative to drugs or alcohol. He’s not cocky-just focused.

That woman taking too long on the equipment you want? She’s a single mom exhausted from working two jobs & raising three kids. She’s trying to push herself to finish her workout, but she needs a little extra rest between sets.

That old man doing strange exercises and talking too much? He decided to get a gym membership to stay active & socialize after his wife passed away last year. Talking to you makes his day & has helped his depression.

There’s more to people than what you see. Instead of jumping to conclusions or making judgements, take a moment to consider someone else’s perspective.

Don’t judge a book by its cover.”

Related:
This Playboy Playmate’s Photo Body Shaming a Woman at the Gym Is Wrong on So Many Levels
You’ll Probably Be Horrified by This Body-Shaming Ad From Gold’s Gym