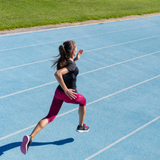 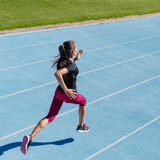 To find out if running longer distances is better than running at a faster speed or vice versa, our friends at Shape asked top experts who can finally set the record straight.

If you consider yourself a serious runner, you may feel settled into one of two camps: speed or distance. You might be able to lap everyone on the track, or maybe you have more marathon bibs than you can count. Or you could be a total running newbie, and don’t know which way is best when it comes to tackling your training (besides, well, putting one foot in front of the other). (No matter where you are in the running game, give our 30-Day Running Challenge a try.)

But there is an answer to the age-old debate regarding which is better: running faster or longer? We tapped running expert Danny Mackey, a Brooks Beast Track Club coach with a Master’s degree in Exercise Physiology and Biomechanics, to find out whether you should dedicate your time on the road, treadmill, or track to upping your pace or extending your distance for all-around get-fit benefits.

Disclaimer: If you’re training for a certain long-distance race (i.e. a half marathon or marathon) or a speed race (like challenging your gym buddy to a 100m dash), your training should be tailored to that event. But if you’re the average, recreational runner, logging miles mainly for the fitness benefits, and want to know where to best direct your efforts, Mackey’s advice will clue you in.

Just do both. Variability is key, says Mackey. Butif you’re only running a couple of times a week, running for speed will get you more bang for your buck in terms of fitness benefits-as long as you give your body time to recover in between.

When you’re running five or six days a week, you need long, slow runs to let your body recover, Mackey says. “When you go harder, you hit all the metabolic levels and intensities,” he says. “Our body is not built with switches; there’s no on or off. And if you’re going hard, you’re using everything. But the consequence is that you have to recover from it, or you’re going to get hurt.” (It helps to make sure your running technique is on-point too.) If you’re running about three days a week, those off days can act as your recovery.

But know that upping your running frequency and simply going long and slow for every run isn’t a great option either. “If you’re going easy all the time, you’re really limiting all the other intensity levels needed to get the full benefit or exercise,” says Mackey. “It’s better than not exercising for sure, but it’s definitely not the only thing you want to do. It’s not great for body composition and for fat storage.”

Running only long and easy won’t cut it for a bunch of reasons. One being the fact that it doesn’t burn carbohydrates. “When you’re going slower, the energy demands are lower, and your body’s going to rely predominantly on fat to drive that exercise,” says Mackey. “We don’t really use carbohydrates for easy runs because we don’t need the energy that quickly. You use carbs when you go at harder intensities, because getting energy from a carbohydrate is a quicker process. If you’re going more intense, the energy demands are going to spike up a little bit, and you body’s going to start using fat and carbs.”

Going at an easy pace also uses fewer muscle fibers, which engages less of your nervous system; Mackey says it’s about 60 percent versus 80 percent during higher-intensity training. Plus, pushing yourself to go faster requires acceleration, which puts a lot of stress on your muscles. This is the good kind of stress, though, the kind that encourages your body to adapt and make improvements.

And, last but not least, you burn more calories per mile when you’re going faster-even if it means you’re running for a shorter amount of time.

All this might have you lacing up your sprinting spikes, ready to hammer out some seriously speedy workouts. But hold up a second. There’s a reason you can’t go all-out all the time. Even when he’s trained pro athletes, Mackey says they would do two, maybe three, really intense workouts per week. “Any more than that, and you could get burned out, start storing calories, see a decrease in your mood, and stop sleeping well,” explains Mackey.

“Faster running is always ideal if you can recovery really well, like if you only have a few days a week to workout,” he says. “If you only have, for example, three days a week to work out, that means you’re recovering on the other four days. So if you could do that and not get hurt, that’s the way to go.” (P.S. There are even more reasons running is good for your body, mind, and mood.)

So for anyone keeping score, sprinters get a point for all the go-fast health benefits, but distance runners get a point for it being gentle enough to do every day. But the best case scenario? Do both. Try a mix of the follow types of training that Mackey uses in his coaching to get the best benefits and reduce injury risk.

Intervals could be fartleks (a Swedish word for “speed play;” for example, run for 40 minutes and do 8 rounds of with 2 minutes at a hard intensity alternated with 2 minutes at an easy intensity). Mackey recommends keeping the intervals between one and five minutes as a general rule of thumb. Your rating of percieved exertion (RPE) should be about an 8 to 9 out of 10. He usually recommends doing these once a week.

Tempo runs are typically run for 20 to 25 minutes at a 6 or 7 RPE. Mackey typically recommends doing these once a week.

Sprints can be done on easier days or long, slow distance days. They consist of 10-second or under bouts of all-out sprints. Their biggest benefit is for your nervous system and coordination, says Mackey. Try adding these to your training once a week.

Long, slow distance runs are pretty self-explanatory-that means running longer distances at an easy pace. Your heart rate should stay under 150, and you can most likely hold a conversation.

Strength training (consistently) is key to preventing injury, even if you’re not doing it often or hard enough to add muscle mass. Just adding some strength work twice a week for twenty minutes, Mackey says, should help keep you from getting hurt.