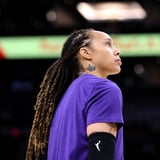 Brittney Griner, an American basketball player for the WNBA’s Phoenix Mercury, was detained in February at a Russian airport after Russian officials claimed they found vape cartridges containing hashish oil (or hash oil) in her luggage. She has been stuck in the country ever since.

But the US government has now classified Griner as wrongfully detained in Russia, according to a May 3 report by CNN, based on information a US State Department representative gave the outlet. Previously, Griner did not have a solid classification status from the US government. This is notable because it means the US government will be attempting to negotiate Griner’s return, rather than waiting for the case to make its way through Russia’s legal system, according to an ESPN report. ESPN also noted that “the Special Presidential Envoy for Hostage Affairs Roger Carstens will (now) lead the interagency team for securing Brittney Griner’s release.” Carstens was a key diplomat in ensuring the release of formerly detained US citizen Trevor Reed from Russia, per an April 28 CNN report.

During a March 23 CNN broadcast, US State Department spokesman Ned Price confirmed that a US Embassy official “has been granted consular access” to Griner and was able to check on her condition in Russian detention. “Our official found Brittney Griner to be in good condition, and we will continue to do everything we can to see to it that she is treated fairly throughout this ordeal,” Price said. According to an NBC report, the athlete’s detention had been extended to May of this year.

Why Was Brittney Griner in Russia?

Griner flew to Russia to play on the UMMC Ekaterinburg team. The 31-year-old has been a member of the Russian basketball team for several WNBA off-seasons. But this particular trip came at a tense time; Griner was detained shortly before Russia invaded Ukraine. The US State Department had issued a “Do Not Travel” advisory weeks earlier, citing the ongoing tension.

The two-time Olympian might have chosen to play overseas during this off-season for many different reasons – including to earn some extra cash. WNBA players typically earn between $60,000 and $229,000, while NBA players can earn upwards of $40 million. According to an Associated Press report, “half of the WNBA’s 144 players” went overseas during the 2022 off-season, with high-ranking athletes earning more than $1 million. WNBA athlete Liz Cambage said on NBA Today that she is able to earn “five to eight times more” by playing overseas.

When Will Brittney Griner Be Released?

In mid-March, NBC reported that the basketball player’s detention had been extended until May, based on information from Russian state news agency TASS. “The court granted the petition of the investigation and extended the term of detention of U.S. citizen [Griner] until May 19,” TASS reported, according to NBC.

Griner’s detention comes amid US sanctions against Russia. Texas Congressman Joaquin Castro deemed Russia’s decision to detain the athlete to be a political move, tweeting, “I’m closely monitoring reports of Texan @brittneygriner‘s detention in Russia. This follows a pattern of Russia wrongly detaining & imprisoning US citizens . . . US citizens are not political pawns.”

Time will tell whether Griner’s new classification under the US government will expedite her release. According to ESPN, the WNBA athlete’s agent, Lindsay Kagawa Colas, told the publication, “Brittney has been detained for 75 days and our expectation is that the White House do whatever is necessary to bring her home.”

As of right now, Griner is reportedly sharing a cell with two inmates who “had no previous convictions and are charged with drug-related articles,” according to Ekaterina Kalugina, a member of Public Monitoring Commission, per NBC.

What Is Hash Oil?

Hash oil is extracted from cannabis, an illegal substance in Russia. Under Article 228 of the Russian Criminal Code, someone who commits an offense related to the “illegal acquisition, storage, transportation, making or processing of narcotic drugs, psychotropic substances or analogues thereof” could face up to 10 years in prison.

Related posts
Why It's Crucial to Emphasize That Abortion Is Still Legal, According to Activists
May 4, 2022
9 Meaningful Things You Can Do to Support Abortion Rights Today
May 4, 2022
Simone Biles Reflects on the Most Difficult Moments of Her Athletic Career
April 27, 2022
For Athletes, Dealing With Hecklers Shouldn't Just Be "Part of the Job"
April 27, 2022
15 Underrated Sports Podcasts That Won't Mansplain What a Field Goal Is
January 5, 2022
Wrong Visa Hinders Novak Djokovic's Australian Open Appearance After COVID Medical Exemption
January 5, 2022
Train With Us
Book Your Complimentary Training