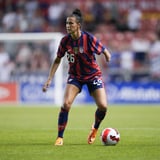 Pro soccer player Carson Pickett made history on Tuesday as US Women’s National Team’s first player with a limb difference. Not only was this her international debut, but it was also the 28-year-old’s first time as a starter. Pickett stayed on the field the entire 90-minute game (super impressive, especially for a player’s first time starting) and helped lead the team to a victory of 2-0 vs. Colombia.

In an interview with ESPN, US coach Vlatko Andonovski said they decided to start Pickett in the game after, “Carson did very well in training for us in last week.”

The match was significant beyond the score. @Cars_Pickett16 became the first-ever player with a limb difference to earn a #USWNT cap. pic.twitter.com/zJ1kGVkyaL

Pickett plays as a defender for North Carolina Courage of the National Women’s Soccer League and, now, the US National team. Previously, she played for Orlando Pride. Born without a left hand and forearm, Carson has become an advocate for limb difference and limb loss awareness in recent years.

In 2019, FIFA Women’s World Cup released a video of the impact Pickett had on Joseph Tidd, a 2-year-old boy with the same limb difference. The video narrates, “thank you for teaching me that what people call a disability is actually my strength, my superpower” over footage of Carson training in the weight room, running on the field, and playing with Tidd.

In April, Pickett posted on her Instagram for Limb Loss and Limb Difference Awareness Month, saying, “While I know that I am confident and comfortable with showing my arm, I know there are so many people in the world who aren’t. The feeling of being different and the anxiety of not fitting in is something that I have been through.”

She went on to share that she used to wear sweatshirts in the summer heat to hide her arm. “Let’s all try to love ourselves no matter what we look like and let’s all be kind to each other above all else,” Pickett continued. “Different people are my kind of people. The world needs more of that.”

The team’s official Instagram was buzzing with comments from fans sending their congratulations to Pickett, with some sharing she’s their new favorite player. Pickett also posted on her own Twitter with a simple but heartwarming, “Dream come true.”

According to ESPN’s latest match report, the US team, now unbeaten in 69 straight games, heads to the CONCACAF W Championship in Monterrey, Mexico. If they continue to play well, they may earn spots in the 2023 Women’s World Cup in Australia and New Zealand, and from there, the 2024 Olympics in Paris.

Related posts
Fainting Ball Boy Saved by Wimbledon Player (and a Candy Fan in the Crowd)
June 28, 2022
How Tennis Scoring Works, So You Can Keep Up With Wimbledon
June 28, 2022
US Swimmer Anita Alvarez Opens Up About Fainting Underwater: "My Health Is Good"
June 27, 2022
Brittney Griner Classified as Wrongfully Detained in Russia; Here's What That Means
May 3, 2022
Simone Biles Reflects on the Most Difficult Moments of Her Athletic Career
April 27, 2022
For Athletes, Dealing With Hecklers Shouldn't Just Be "Part of the Job"
April 27, 2022
Train With Us
Book Your Complimentary Training