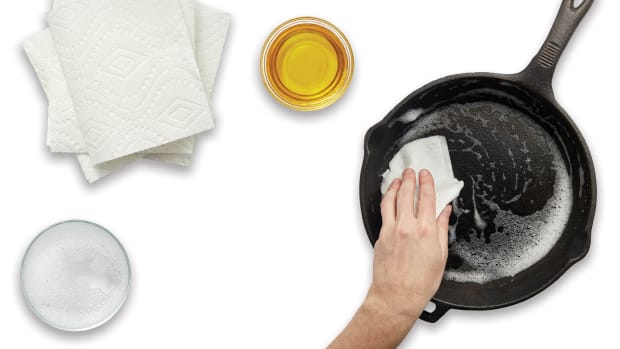 With only 10 ingredients or less (not including oil, salt and pepper), each of these mouthwatering dishes is made in one cast iron pan for minimal fuss and uber-easy cleanup.

Every cook should own one of these kitchen workhorses: Inexpensive and nearly indestructible, cast iron pans last for years. They retain heat well, can go from stovetop to oven and can be used with metal utensils. Keep in mind that, though not a unanimous belief, many chefs say using cast iron to make long-cooking, acidic foods (like tomato sauce) may cause the iron to leach and give food a metallic taste.

A cast iron pan is only as good as its seasoning, which is a very thin layer of oil that bonds with the metal and gives it a glossy, stick-resistant surface. You can purchase a pre-seasoned pan, but remember that any cast iron will need to be seasoned periodically. To season your pan, scrub it in soapy water, dry it, then wipe a little bit of neutral oil (like coconut) all over the cooking surface with a paper towel and place it over high heat on the stove. Heat the pan until it’s smoking, wipe it one more time and let it cool. When it comes to cleaning, it’s fine to use soap to clean it (though you may need to season it again if you do), but avoid soaking the pan or leaving it wet.

Not interested in the added maintenance of traditional cast iron? Try enameled cast iron – quite simply, cast iron cookware with an enamel coating over the cooking surface. You’ve probably seen them in their bright colors and shapes, ranging from Dutch ovens to skillets and even lasagna pans. With the same heat retention and durability of traditional cast iron, this cookware will never rust or need to be seasoned. Plus, you can simmer acidic foods without worrying about leaching. A downside? Unlike regular cast iron, enameled cookware can chip or crack if handled roughly.