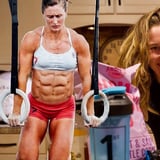 Tia-Clair Toomey has won the CrossFit Games for her fourth year in a row, and with the title of the “Fittest Woman on Earth,” aren’t you curious to know what she eats to fuel her workouts? In this video she shows us exactly what she eats in a day, and includes the macros for each meal that she calculates using My Fitness Pal.

When Toomey fuels up before training in the morning, her breakfast consists of oatmeal with berries and a bagel with peanut butter and banana – about 430 calories and 100 grams of carbs. She said she understands that it seems like a lot of carbs for one meal, but that’s because she’ll be exerting a lot of energy during her training. After breakfast, she likes to take her vitamins, such as omega-3s, a multivitamin, probiotics, zinc, CBD, and ACV gummies, on a full stomach.

Toomey also fuels up during her workout, because she’s often at the gym for four to six hours. She’ll have a Fuel for Fire pouch, fruit, or a tiny meal. Within 30 to 60 minutes after her training, she has a shake with protein and carbs to help with her recovery, made with a scoop of 1st Phorm Loop D Fruit protein powder. It’s her favorite flavor because “it tastes like Fruit Loops – it’s amazing,” she said.

What a CrossFit Athlete Eats in a Day – the Calorie Amount Will Astound You!

Lunch is a salad with apple, avocado, and salmon, which is about 300 calories. Guess what’s for dinner? A 700-calorie Chipotle bowl with chicken, black beans, white rice, guacamole, salsa, cheese, and lettuce. After dinner she enjoys some warm, sleepy tea with a protein bar.

Toomey’s daily goal is about 2,500 calories (recommended by her coach), but she follows how she feels and will eat less if she feels satisfied, or more if she’s tired or hungry. She explains that she tried saving her macros for the evening so she could eat “whatever junk food I could,” like chocolate and candy, but after three days, that took a toll on her training, and Toomey said, “I was crumbling.” So she focuses on including healthy, wholesome, low-calorie foods like veggies, she said, “to feel like I’m eating a lot, but really I’m not.”

On the day the above video was filmed, Toomey’s macros were 261 grams of carbs, 69 grams of fat, and 134 grams of protein, which was in the ballpark of the macros she tries to reach when she’s competing. She said the most crucial thing with nutrition is to listen to your body, and change things if they’re not working or you’re not feeling well. She hopes sharing what she eats in a day leading up to a competition will be helpful to others.

Related posts
Trump Blames the COVID-19 Spike on Increased Testing – But the Numbers Prove He's Wrong
October 27, 2020
Cupping Isn’t Just For Muscle Pain – It’s Used For Gut and Digestive Health, Too
October 26, 2020
You Can Bet I'm Only Eating Fall-Inspired Dairy-Free Ice Cream Until It Snows
October 26, 2020
From Pies to Muffins to Smoothies, These Vegan Pumpkin Recipes Are Packed With Protein
October 26, 2020
I've Tried Working Out in 8 Brands of Masks, and Carve Masks Are My Fave – They Only Cost $8!
October 26, 2020
How Effective Are Blue Light Glasses in Combatting Headaches? Experts Weigh In
October 26, 2020
Train With Us
Book Your Complimentary Training