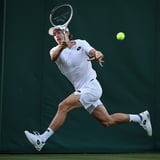 If you’re tuning in to Wimbledon to catch the action but feeling a little confused by what’s happening on the court, don’t fret. Tennis scoring can seem complicated at first, but once you get the hang of it, you’ll feel like a seasoned fan. Here’s a primer on scoring as Wimbledon begins this week.

Related posts
Carson Pickett Makes History as USWNT's First Player With a Limb Difference
June 29, 2022
Fainting Ball Boy Saved by Wimbledon Player (and a Candy Fan in the Crowd)
June 28, 2022
US Swimmer Anita Alvarez Opens Up About Fainting Underwater: "My Health Is Good"
June 27, 2022
Serena Williams Talks About Olympia's "Alright" Tennis Skills on Ellen
May 2, 2022
Simone Biles Reflects on the Most Difficult Moments of Her Athletic Career
April 27, 2022
For Athletes, Dealing With Hecklers Shouldn't Just Be "Part of the Job"
April 27, 2022
Train With Us
Book Your Complimentary Training