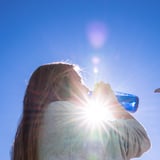 Only a month into summer, intense heatwaves are taking over large parts of the US and Europe. Britain experienced its hottest day in history on Tuesday, with temperatures hitting 104.4 degrees Fahrenheit, and intense wildfires have started in Spain, Greece, and France. Meanwhile, Texas, the Central Great Plains, and the Southwest are all under heat warnings, with some areas breaking into triple-digit heat. San Antonio experienced its hottest May and June on record and is on track to experience another record-breaking heat spell in July. Meanwhile, Tulsa, OK, has experienced 11 triple-digit days this summer, and the temperature this week is expected to land between 100 and 109 degrees.

According to the National Weather Service, a heatwave is a period of abnormally hot weather lasting more than two days. These waves can strain our bodies, resulting in illness and, in extreme cases, death. In this kind of weather, it’s important to recognize the signs of heat-related illnesses and know when to seek medical treatment.

What Is Heat Exhaustion?

There are three heat-related illnesses to watch out for: heat cramps, heat exhaustion, and heat stroke. Heat cramps are the mildest, with symptoms such as heavy sweating, fatigue, and muscle cramps, according to the Mayo Clinic. You can treat heat cramps with rest and hydration. Heat exhaustion can cause more severe symptoms, such as dizziness, rapid pulse, nausea, and headaches, as well as cramping and fatigue. Untreated, heat exhaustion can develop into heatstroke, which can be life-threatening and require emergency medical attention.

What’s the Difference Between Heat Stroke and Heat Exhaustion?

Heat stroke and heat exhaustion share many symptoms, but they differ in severity. “The biggest difference, quite simply, is that heat stroke can be fatal if untreated,” Kara Telesmanick, MD, Inspira Health Urgent Care physician says. “To identify heat stroke, be on the lookout for an altered mental state, rapid breathing, and flushed skin, in addition to the symptoms that accompany the initial heat exhaustion. Someone experiencing heat stroke may also stop sweating, which can be deceiving in recognizing the condition.”

Once your body temperature hits 104 degrees, it’s likely that you have heat stroke. A temperature that high can cause fatal organ damage, so you should seek immediate emergency treatment. “On the way to [treatment], the affected person should drink cold water and apply cool compresses that help to cool the body down gradually,” Dr. Telemanick says.

What Increases the Risk of Heat Exhaustion?

There are certain factors that increase the likelihood of heat exhaustion or heat stroke. Older people and children, for example, are at higher risk in extreme heat, as are people with chronic health conditions like heart or lung disease, according to the Mayo Clinic.

But what most people don’t realize is that certain medications – including antidepressants and antipsychotics – can interfere with your body’s ability to regulate temperature, per the Mayo Clinic. Common antidepressants that can increase your risk of heat-related illness include Fluoxetine (Prozac, Sarafem, Symbyax), Citalopram (Celexa), Escitalopram (Lexapro), Fluvoxamine (Luvox), Paroxetine (Paxil, Pexeva), Sertraline (Zoloft), and Trazodone.

Additionally, migraine and allergy medications reduce sweating, which is a key way your body cools itself down in the heat, according to US Pharmacist. Stimulants, as sometimes prescribed to people with ADHD, also make you more likely to experience heat-related illnesses because they raise your base body temperature. And diuretics (such as spironolactone, a drug commonly prescribed for acne) also increase the risk of dehydration, which is often a factor in heat exhaustion. Don’t stop taking your medication just because it’s listed here; if you’re concerned about heat exhaustion and you’re taking one of these drugs, chat with your healthcare provider about the best plan of action.

How Do You Treat Heat Exhaustion?

If you have any symptoms of heat exhaustion, you should take action ASAP. For starters, try to lower your body temperature as soon as possible, Dr. Telemanick says: “Drink plenty of fluids, remove tight or extra clothing layers, take a cold shower or use cold compresses, and move to an air-conditioned area.” If you treat your symptoms quickly, you should start feeling better within an hour. If symptoms aren’t improving, see a doctor immediately.

As with most illnesses, the best medicine for a heat-related illness is prevention, Dr. Telemanick says: “By being cautious of how much time you spend in the sun, along with drinking plenty of fluids and staying in shaded areas, you can make yourself much more likely to be safe from falling ill.”

Related posts
First Polio Case in Nearly a Decade Found in US – Here's What You Need to Know
July 22, 2022
What to Know About Novavax, the Fourth COVID Vaccine Approved by the CDC
July 20, 2022
What Is Pancreatitis, and What Causes It?
June 29, 2022
As Monkeypox Cases Spread, US Announces New Vaccination Plan
June 29, 2022
What a Roe v. Wade Overturn Could Mean For Birth Control
May 5, 2022
Why It's Crucial to Emphasize That Abortion Is Still Legal, According to Activists
May 4, 2022
Train With Us
Book Your Complimentary Training