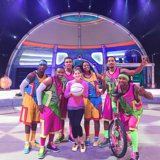 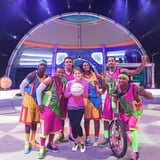 Last week, I boarded the train and headed from my Friday morning SoulCycle class to a new type of workout. I was about to get a training session . . . at the circus.

Related Stories:
Overcome Your Fear of Working Out With These 2 Simple Tips

To be perfectly honest, I’d never actually seen a circus in my whole life! When I envisioned it in my head, circuses were the classic red and white striped tents, peanuts, elephants, “Entry of the Gladiators” by Julius Fucik, and top hats. So when I showed up at the Oracle Arena in Oakland to see the place transformed by Ringling Bros‘ “Out of This World” show, I was totally taken aback. This was something much grander than I anticipated.

First up was meeting – and working with – the contortionists. I met three young ladies: Sabina from Ukraine and Erika and Nomin from Mongolia. They showed me a little bit of what they do in the show, before inviting me to come be a part of their stunts. Mind you, I’m nowhere near close to being flexible enough to try what they do, but they had me act as a support, while one of them jumped onto my shoulders. Check it out.

Me, doing it wrong

It actually takes a lot of arm strength to support another person’s weight in that position. Knowing that this one simple move required some muscle, I was blown away by the things they were able to do for the actual show that night.

The girls in action. I assume their spines are made of cartilage.

I chatted extensively with Ringling’s coach, Anna Kaminnik – she’s a petite powerhouse and a performer herself. She discussed the importance of stretching and proper warmups and cooldowns for these types of gymnastics and how they’re essential to keeping these performers prepared for extensive hours of training, plus multiple shows each week. She also noted it’s how you can keep your body from breaking down over time and protect your joints and posture so you don’t deal with injuries down the line.

Then Anna decided it was my turn to be an aerialist. After Ashley gave me an example of what she does in the air (over the ice . . . on ice skates!), I was up. Anna told me to do a splits, which was a joke to me (I’ve never done a splits in my life), but she insisted it was possible with my feet tied into silks and my upper body supporting all of my weight. I tried my best.

Anna coaching me into “splits” and me smiling because I almost got there.

I did a few more maneuvers while suspended from the ceiling, using my arms as leverage – Anna told me all the blood rushing to my head was good for my skin. I believed her. She told me I was “really strong.” I believed her less. But she insisted I was, reminding me that holding your entire body up with just your arms is pretty darn tough. She showed me how transitions in between moves and poses were essential to creating a seamless performance and how a lifetime in gymnastics prepared her to be the best coach for the hundreds of performers and athletes in The Greatest Show on Earth.

Then it was time to train with the King Charles Troupe – basketballers on UNICYCLES. The hanging from the air thing was intimidating but a unicycle? Team sports? Terrifying. I had just come from a SoulCycle class, in which a stationary bike that does not move and has TWO wheels was enough of a challenge. But this?!

There I met Lionel, Jordan, Harvey, Evan, Amir, Marcus, and the solo lady on the squad, Aaniya. They’re some of the most physically talented people I’ve met, and they have so much fun doing what they do. Want a new fitness challenge? Try riding a unicycle while jumping rope – double dutch. That’s what these guys (and girl!) do on a daily basis, and they make it look as easy as breathing.

I will say, I did get ON a unicycle, but definitely didn’t ride it on my own – Lionel and Marcus had my back and wheeled me around like a baby in a stroller. A unicycle stroller. Many of you have probably ridden a stationary bike, right? With zero resistance on the wheel, it’s quite hard to sit up straight without leaning forward and using the handlebars as support. That’s basically what it’s like to ride a unicycle – it takes SO much core strength!

Trying to fit in with the all-star King Charles Troupe.

I left the circus training with sore arms, sore abs, and a new appreciation for the athleticism involved in each of these incredible acts. When I got to see the show in action, I was blown away even more. All of these calisthenics and physical feats were performed on ice. It was like the Olympics meets America’s Got Talent. Doing double front flips onto a series of trampolines, in your ice skates, then landing smoothly on the ice? Insane. Doing full splits while you’re suspended from a string from the ceiling above said ice? Unreal!

All of this opened my eyes up beyond the traditional world of sports and fitness, too. These people aren’t working their bodies because they want to be skinny or lose weight. They’re not competing for a gold medal or national title. They’re moving for the joy of movement and because it makes them feel good. Not to be a motivational cat poster, but physical activity is a gift. I totally walked away with a renewed appreciation for that gift, and for that I am immeasurably grateful.