May 3, 2016Before and After Weight LossBy Abby Ellin 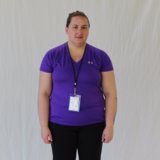 Some people spend their vacations whooping it up in Cancun, wrestling in the mud, or drinking themselves into oblivion. Others devote themselves to service, such as building houses for the poor or tilling organic farms.

Then there are those who do something good for themselves: drop a few pounds, say, hike really big mountains, or commune with nature. Which brings us to Utah – specifically, to Movara Fitness Resort in Ivins, where people of all ages (including college kids) go to, well, get it together.

“We’ve been seeing a lot of college kids during Spring break and the Summer; it’s a way for them to take some time and focus on better health habits,” says Robin Walden, Movara’s program director. “It is really beneficial for them to figure out how to live a healthier lifestyle at such a young age and hopefully do that for the rest of their life. It’s an inspiration to our older guests to witness them finding a healthier path at such a young age.”

Bridget Scott is one of them. Now 33 and a grad student, Scott spent a week at Movara this year (and six weeks a year earlier) trying to feel good about herself. And she succeeded.

I’ve always had a bit of a weight problem, but it really blew up when I started taking Depo-Provera, the birth control shot. I put on 100 pounds in about one year. I’m 5’3, and I got up to 250. That’s a lot of weight for a short person to haul around.

A hundred pounds is an overwhelming number. You can’t imagine how you’re going to lose that much weight.

I’m a grad student at Seattle University of Criminal Justice, getting a master’s in criminal justice. School is really stressful. Also, in December of 2014, I was diagnosed with bipolar disorder Type 2, and I struggled with the diagnosis. The medication was difficult to manage; it took some time to find the right balance with the side effects.

I was spiritually, emotionally, and physically broken. I’d get out of breath when I walked up a flight of stairs. I couldn’t bend over and reach my feet to tie my shoes. My periods were erratic. I was in such a bad place. I’m a big-time emotional eater. For me, food is a coping strategy. I’d be in a frustrating meeting or class and afterward I’d somehow make my way down to the cafe. Next thing I knew I’d have a candy bar in my hand or mouth. I wasn’t even aware I was doing this! I was on autopilot. Then I’d feel guilty, and the guilt would make me eat more. It’s a vicious cycle.

Why I Chose a Weight-Loss Resort

I knew I needed to commit to losing weight, but I couldn’t do it on my own. But I didn’t want to go to a spa where you juice and do colonics; I wanted to make a change and move my ass and earn it. A year earlier, my father and I had spent two weeks at Fitness Ridge (now Movara Fitness Resort) in southern Utah. You hike every morning in the gorgeous red mountains, you do kickboxing or boot camp in the afternoon, and you eat about 1200-1500 calories of really delicious, healthy food that they prepare. There are also lectures about nutrition and emotional eating. The first time, I lost six pounds, gained a significant amount of muscle, and went down a few dress sizes. I felt awesome for a while after, but then, of course, life kicked in and I gained the weight back.

My father offered to pay for me to return to Movara, and in February 2015 I did, this time for six weeks. My school gave me a leave of absence, and it was the smartest thing I’ve ever done for myself.

God knows, it’s not easy. Movara is a tough routine to adapt to. Not only are you eating fewer calories than before, you’re also exercising a lot more. A typical day goes something like this.

The first week was traumatic. It was like: what am I doing here? My body ached. My head throbbed. I went through a pretty major caffeine withdrawal (it’s not allowed).

By the second week, I was more acclimated to the routine. I was exhausted, but things didn’t hurt like they did the first week, and I wasn’t staring at the schedule and shuffling around like a zombie wondering why I came.

By the third week, I could finally hear the lectures. After hearing things repeated a few times, they finally sunk in.

The hikes were the best part for me, these big red cavernous mountains. Truly inspirational. I would get out into Snow Canyon State Park, one of Utah’s many national parks, and I’d have a visceral, emotional response. I’d be on a “little stroll” and I’d glance up at the mountains with my headset on, and I’d have moments of sheer bliss. I’m exactly where I need to be, I thought.

Image Source: Movara Fitness Resort
How did I do it? This time I made some changes. When I left Movara the first time, I was really rigid with my eating and exercise. I thought if followed the same routine, like a prescription, then I’d be fine. But I didn’t allow for any slip-ups. I had “all or nothing” thinking – that is, if I ate one M&M, I’d get so defeated I’d think, why not scarf down the whole bag? Or seven? I don’t think I fully committed to the mental aspect of losing weight the first time. And so much of losing weight really is mental.

This time I understood something different: you can work out as hard as you want, but if you don’t embrace the mental stuff, you’ll never learn the lessons. You also have to be kind to yourself. If you’re going to have cake on your birthday or a dessert on a date, enjoy it! Don’t beat yourself up, and don’t blow your entire diet over it. Instead of having ice cream for dinner, I ate dinner for dinner. What a radical concept!

At Movara, I met a life coach named Jen Morton, who’s phenomenal. She believes that people are the most successful at weight loss when they track something. It doesn’t have to be weight or calories; it can be water or fiber or steps. Whatever. The idea is just to track something that won’t make you too crazy, just to keep yourself accountable. For me, that meant keeping track of how much fiber and protein I have and how many veggies I eat. My weight loss has been predominately around eliminating my bad food habits.

“We all learn how to exercise by the time we’re 5,” said Jen. “We know how to run and skip and play. We know how to move our body and exercise. We just don’t know how to treat ourselves so we don’t use food as a weapon. We do these terrible things with food and we stop using food as fuel. And we need to start thinking of food as fuel again.”

I’d never really looked at it that way, but she’s right.

Finals this year were as crazy as always. I’m definitely a stress eater, and I noticed the numbers creeping back up on the scale: 166, 168. My father saw how tense I was. “How about Maui for spring break?” he offered.

I shook my head. “Honestly, I’d rather go back to Movara.” I knew a visit would put me back on track.

This time I went with my mom [Marian Bulger, pictured in the top photo], exactly one year after I left the year earlier (that’s us in the top photo). It felt like such a great way to celebrate my success.

A lot of people who return to Movara or other so-called “fat camps” do so because they’ve gained a lot of their weight back. But I hadn’t. The staff was so excited to see someone – me! – who had worked so hard at home and was actually smaller than when she left. It never occurred to me that they would take such joy and shared success in my own success. It made me proud, and showed how much they cared. I lost six pounds in one week, and feel like I got a much-needed tune up. Interestingly, I have not worked out since I got home!

When I returned to school, one of my classmates asked me what I did over Spring break.

“I busted my ass, lost six pounds, gained a pound of muscle, and got a nice little tan,” I said. “What about you?”

“I ate my ass off and didn’t do anything,” she said. “I kinda wish I did what you did.”

Writer Abby Ellin is the author of Teenage Waistland: A Former Fat-Camper Weighs In on Living Large, Losing Weight, and How Parents Can (and Can’t) Help.

Related posts
I Lost (and Kept Off) 70 Pounds by Doing These 3 Things
November 17, 2017
Here's Every Step Megan Took to Lose 37 Pounds
November 17, 2017
How Zumba Helped 1 Woman Dance Off 230 Pounds
August 27, 2017
Ellie Transformed Her Body in Her 40s With the Help of Gold's Gym
August 27, 2017
See What It Took For Becca to Lose 106 Pounds – the Before and After Photos Are Stunning
November 2, 2016
Taylor Transformed Her Body by Ditching the Scale and Joining Tone It Up
October 28, 2016
Train With Us
Book Your Complimentary Training