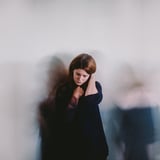 Every now and then, my therapist and I will have what I like to call a breakthrough moment (and I don’t necessarily mean that in a “wow, my anxiety is gone forever!” type of way). For me, a breakthrough moment in therapy happens when a new tip helps me literally break through a prior assumption or obstacle I didn’t even realize I was carrying. The most recent example is when I learned about externalization.

This happened a few weeks ago, when I was talking to my therapist about a moment at work when my anxiety made me fully spiral. I told her about how the wave of anxiety rolled over me like a tidal surge, and how it made me feel powerless – like I was unable to stop it or fend it off. As I described the scene, my therapist suggested I try something new.

I tend to see anxiety (and all not-so-great-feeling emotions, really) as an adversary, something I have to resist and defeat. She suggested that I try instead to view my anxiety as a chatty, worried, or overly opinionated friend who always has to offer their take on a situation – even when I didn’t ask for it. From there, she prompted me to talk to my anxiety like I would to a friend. I could say, for example, “Thank you for sharing that opinion. I’m going to choose to do it this way instead, but I appreciate your input.” The point was to see my anxiety as less of an evil and more like another voice offering a different viewpoint – no more or less powerful than any other.

In practice, it worked. The next time I started feeling anxiety, I stopped, took a breath, and imagined that worried, well-meaning, and opinionated friend offering up their unsolicited thoughts. “Oh, thanks,” I imagined myself saying. “That’s an option, but I’m going to go with this one instead.”

How to Externalize Anxiety

This technique of creating a “character” for your anxiety is called externalization. The idea is to “see our anxiety as being outside of ourselves,” psychotherapist Jamie Keaton Jones, LICSW, PhD, says. “Externalizing anxiety often makes it much less overwhelming to address, because we are not looking to alter who we are, but rather, how we are reacting to an experience.”

There are a few different ways you can utilize this technique. “Sometimes I have my clients give their anxiety a person’s name,” therapist Emilea Richardson, LMFT, says. From there, as my therapist recommended, you can “talk” to your anxiety. You could say something like, “Wow, Susan is really freaking out right now” as a way to differentiate yourself from your anxiety, Richardson says.

Some therapists, particularly those who see children, take this a step further and recommend using an object like a stuffed animal as a way to represent a physical form of externalization. You could also draw a “worry monster” to achieve the same results. This provides a visual cue to remind you that your anxiety doesn’t define you and that you don’t have to identify with the negative emotions it triggers.

“Externalizing invites my clients to be kinder to themselves,” Richardson says. Personally, I can vouch for that benefit. When I externalize, I find that my natural frustration with anxiety turns into self-compassion and understanding. I’m allowing myself to see anxiety not as an enemy, but simply as a chatty voice in my head. I’m also less prone to self-blame, because I’m no longer identifying so strongly with the anxious thoughts.

Another way to externalize anxiety, Dr. Jones says, is by simply acknowledging it as something outside of yourself. “Instead of saying ‘I am an anxious person,’ we say ‘I am a person who is experiencing anxiety,'” Dr. Jones explains. That way, “we remove anxiety from being part of how we self-identify.” Anxiety becomes nothing more than a reaction to a feeling instead of an inextricable part of us.

You can also practice externalization by journaling and meditating, psychologist Tynessa Franks, PhD, says. She recommends journaling about the times you have overcome or navigated past anxiety in order to create a record of your past successes. This can remind you that anxiety “is an emotion that exists outside of you, and there are tools you can use to help care for yourself when it arises,” Dr. Franks explains. As for meditation, Dr. Franks says, one of its primary benefits is that it helps you “recognize the separation” between yourself and your thoughts. “This is the cornerstone of externalizing anxiety,” she says, “So it makes sense that this practice can work wonders.”

As for where I’m at now? Well, externalization didn’t make my anxiety completely disappear (please let me know if anyone finds a way to do that). It did, however, change how I see it. For the first time, I could recognize that my tendency to demonize my anxiety just gives it more power and makes it feel impossible to confront. Trivializing the anxiety usually resulted in shame, which doesn’t help either. Externalizing strikes the perfect balance, helping me acknowledge and respect the anxiety while also separating it from myself and bringing my thoughts back down to earth. There, I can deal with it just like I would any other unsolicited opinion: by smiling, saying thank you, and doing what I think is best regardless.

Related posts
Simone Biles Reflects on the Most Difficult Moments of Her Athletic Career
April 27, 2022
PTSD Is More Common Than You Think. This Is What to Know
April 27, 2022
Is In-Person Therapy "Better" Than Virtual Sessions? Therapists Weigh In
April 27, 2022
Ireland Baldwin Says Eating Disorders Turned Her Into a "Lifeless" Person
April 27, 2022
What Is "Brain Flossing," and Does It Have Anything to Do With Neurodiversity?
April 26, 2022
I Meditated Every Day of 2021 – Here's How Hard (and Rewarding) It Really Was
January 6, 2022
Train With Us
Book Your Complimentary Training