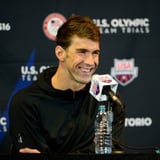 Michael Phelps made US men’s swimming history with his latest win on June 29 at the US Olympic Team Swimming Trials. He qualified for the Olympics for the fifth time with his victory in the 200-meter butterfly – the same race that first qualified him at 15 years old and made him the youngest male to break a world record. The life of this 31-year-old athlete has come an emotional full circle, as he had thoughts about giving up his professional career back in 2012. He’s since gotten engaged and had a baby boy named Boomer.

“I think that means the most to me,” he told The Baltimore Sun after his race. “With everything that’s happened to me, sort of being able to come back, that was probably harder than any swim I’ve had in my life . . . Just being able to finish [my career] how I want to is so important to me.”

This is amazing news for Phelps, and we can’t wait to see how he performs in Rio de Janeiro, Brazil, this August.

Related posts
A Paralympic Hand-Cyclist Wins Gold Just Before the Anniversary of His Tragic Accident
September 15, 2016
Despite Losing His Arms, This Paralympian Is a Master Table Tennis Player
September 14, 2016
These 4 Paralympians Finished the 1500-Meter Race Faster Than Any Olympians
September 13, 2016
Yes, Barre Classes Are Really Freaking Hard – Even For Michael Phelps
September 9, 2016
The Paralympics Torchbearer's Spirit Will Be the Most Uplifting Thing You See Today
September 8, 2016
Sick of Swimming Laps? Try These 8 Pool Exercises Instead
September 7, 2016
Train With Us
Book Your Complimentary Training