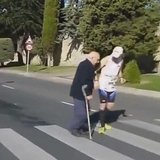 Marathon runners have a bad rap for being totally consumed in the race, not letting anything or anyone get in the way of their finish time. And understandably so, they’ve trained for months and months for race day. But what happens when an elderly man happens to cross the road in the middle of a marathon? In the video, above, you’ll see runners deliberately going around a man who’s slowly making his away across until one considerate racer takes a few seconds to offer his assistance. A couple passing competitors even clap as he does so. Such a sweet and simple gesture proves that maybe runners do have hearts of gold – instead of purely focusing on the gold – after all.

Related posts
Just When You Thought You Were the Healthiest Person You Know
October 31, 2016
Should You Work Out on Halloween? This Is What Jillian Michaels Says
October 31, 2016
Hilarious Proof That Chocolate Cake Doesn't Want You to Lose Weight
October 28, 2016
Get Inspired: This 75-Year-Old Woman Just Did Another 140.6-Mile Ironman Race
October 11, 2016
Shirin Gerami Makes History, Becoming First Iranian Woman to Finish Kona Ironman Triathlon
October 10, 2016
We're All Out of Excuses After Seeing This Panda Doing Sit-Ups
September 30, 2016
Train With Us
Book Your Complimentary Training