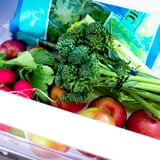 It seems that an unusually high number of foods have been recalled in the last month. Costco issued a warning about some of its frozen fruits and vegetables, then Nature Made also announced it was recalling some of its vitamins. Now, Target and Walmart have joined the growing list of frozen vegetable recalls across the country.

Concerned they might be contaminated with listeria, Target is recalling some of its Market Pantry products and Walmart is recalling some of its Great Value vegetables. Specifically the recall affects green peas mixed vegetables purchased between September, 2015, and June 2, 2016. A complete list of the recalled products, including their packaging code for reference, can be found on the FDA’s website. Thankfully, no one has gotten sick from the vegetables; the recall is merely a precaution. If you have purchased any of the recalled products, you can return them for a full refund.

Related posts
Here's What a Doctor Has to Say About All That Protein You're Eating
November 17, 2017
What You Should Be Eating If You Want to Lose Weight
August 27, 2017
ClassPass Is Nixing the Unlimited Option That Made It Famous
November 2, 2016
Is Broccoli the Secret Fountain of Youth? A New Study Says Yes
October 31, 2016
The Scary Truth Behind Your To-Go Oatmeal
October 21, 2016
Why Your Migraines Could Be Triggered by Wine and Chocolate
October 19, 2016
Train With Us
Book Your Complimentary Training