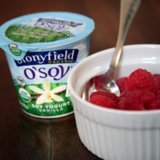 In college, my stomach turned against me. Every day I suffered from an uncomfortable, bloated feeling, and I never knew if I was going to be constipated or, equally as bad, going to have to stay near a bathroom. My doctor sent me to a gastroenterologist, who ran a test for celiac, which came back negative. I saw a naturopath who told me – a vegetarian since 13 – to start eating meat (um, thanks, but no). Eventually I was diagnosed with IBS (irritable bowl syndrome), but no one had any solid advice for how to deal.

Because all my friends were nature-loving vegans (and I was clearly lactose intolerant), I decided to go vegan, which helped, as did giving up gluten. I was a gluten-free vegan for six years, but because I wasn’t eating enough protein and was downing tons of gluten-free junk, I gained a bunch of weight. So I went back to eating dairy, eggs, and gluten, and since I was eating a much healthier diet than my french-fry-loving vegan college days, I surprisingly felt almost 100 percent.

Fast-forward to July 2014. After watching the documentary Vegucated, I remembered the reasons why I went vegan so many years ago, and I gave up dairy on the spot. At first, my digestion improved, but then a few weeks later, those same symptoms came back, and this time it was even worse. I took a mental note of how my diet had changed and realized that when I was eating dairy, I ate Greek yogurt as a daily morning ritual. So I started eating soy yogurt and boom! – I felt amazing within two days. I was in shock. Probiotics were the cure I needed all along!

Nutritionist Willow Jarosh, RD, of C&J Nutrition explains that probiotics are good-for-you bacteria that live in our bodies, and more and more research is showing their benefit to general health, skin, weight control, and mood. “Certain strains of probiotics are especially gut-friendly, helping to reduce IBS-related symptoms like bloating, constipation, and diarrhea,” she explains. Willow suggests taking a supplement or eating a food that has probiotics to help build up the numbers of good bacteria, so they can edge out the bad bacteria that could be detrimental to our health and cause unwanted symptoms.

If you’re dealing with tummy troubles, it’s worth going the probiotic route, and yogurt is an inexpensive healthy choice. I eat one six-ounce container of soy yogurt (with some fiber-full berries, also great for the digestive tract) at least every other day, and my digestion has never been better. If you’re not a fan of soy and still want to avoid any digestive issues that come with eating dairy, try yogurt made from almond milk or coconut milk.

Related posts
Here's What a Doctor Has to Say About All That Protein You're Eating
November 17, 2017
50 Shades of Red: What the Color of Your Period Actually Means
August 27, 2017
I Had No Idea This Food Caused Bloating and I Was Eating It Every Day
November 1, 2016
The Best Dairy-Free Halloween Candy (Most Are Vegan, Too!)
October 29, 2016
The 100-Calorie, High-Protein Chocolate Treat Your Body Is Craving
October 28, 2016
Our Vegan Starbucks Pumpkin Spice Latte Hack Also Cuts Down on Sugar
October 26, 2016
Train With Us
Book Your Complimentary Training