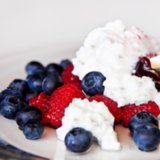 Just as important as it is to fuel up before you exercise, don’t forget to eat a little something once your workout is complete. Your body needs a combo of protein and carbs to build and repair muscle and quickly recharge lost energy. Don’t go overboard and consume so many calories that it cancels out the ones you burned while sweating it out. Here are some ideas for post-workout snacks, all under 150 calories.

4 Things You Should Never Eat