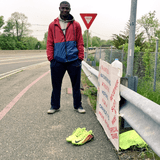 Abiola Aborishade just wants chance to tryout for @Patriots! If his heart is any indication of ability, he’s gold. pic.twitter.com/w0dqc8rnYc

Just like any high-profile career, getting a job in the NFL is hard work . . . and one football player in Massachusetts is willing to go above and beyond for a chance to play professionally. Abiola Aborishade, 23, who holds the single-season catch record for the University of Massachusetts Dartmouth football team, has stood outside of the New England Patriots stadium since April 21 in hopes of landing a tryout.

Abiola Aborishade has stood outside Gillette Stadium since Apr 21.

Complete with a sign that lists his football skills and his ultimate goal – “hoping for a chance to prove myself” – the Nigerian-born athlete stands at the entrance to Gillette Stadium for upward of seven hours per day, hoping to earn attention from the Patriots coaches and players who could give him a shot. “I’m out here trying to get a tryout,” Aborishade told local news about his plight. “It’s like another job . . . I’m hoping that at some point they drive by and say ‘OK, we want to see what you can do.'”

It seems that Aborishade has captured the attention of at least one Patriot, because cornerback Malcolm Butler recently posted his photo on Facebook applauding his dedication and passion for the game.

All that’s left for Aborishade is a chance to prove himself; hopefully the Patriots get wind of this inspiring gesture and give the man a tryout!

Related posts
A Trainer Gets Brutally Honest About Why You Aren't Seeing Results
November 17, 2017
Stay on the Healthy Path This Weekend With These Inspiring Quotes
November 17, 2017
Change This 1 Thing to Get More From Every Workout
August 27, 2017
Should You Work Out on Halloween? This Is What Jillian Michaels Says
October 31, 2016
Why These 4 Star Trainers Think You Should Be Taking More Gym Selfies
October 28, 2016
Inspire Your Fit Friend With These 30 Motivational Quote Gifts
October 28, 2016
Train With Us
Book Your Complimentary Training