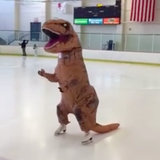 Posted by TrexTuesdays on Tuesday, January 26, 2016

We don’t know the when – or the why, for that matter – but there appears to be a new fitness-related trend involving massive dinosaur suits. And it’s awesome.

Facebook user TrexTuesdays has been sharing videos of people doing pretty ordinary things in T. rex costumes. One, in particular, depicts said T. rex ice skating – and it’s seriously so good we don’t know how it hasn’t been nominated for an Academy Award.

Watch the video above, and prepare to laugh until you cry. (And yes, you should listen to it with the sound on.)

Related posts
Just When You Thought You Were the Healthiest Person You Know
October 31, 2016
Should You Work Out on Halloween? This Is What Jillian Michaels Says
October 31, 2016
Hilarious Proof That Chocolate Cake Doesn't Want You to Lose Weight
October 28, 2016
We're All Out of Excuses After Seeing This Panda Doing Sit-Ups
September 30, 2016
Watch Usain Bolt Fly Through a Parking Lot in His Most Entertaining Race Yet
September 28, 2016
14 Times Chipotle Interfered With Our Healthy Goals
September 23, 2016
Train With Us
Book Your Complimentary Training