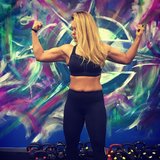 Weight-loss journeys are truly some of the most inspiring – Justine McCabe’s story is no different. Her story begins with a tragedy: Justine’s husband committed suicide a year ago, leaving behind Justine and their two children. After mourning, as anyone would, for several months, Justine’s family suggested she go to the gym as it might provide temporary relief from pain. According to Caters News Agency, Justine began her weight-loss journey at 313 pounds. From day one, Justine vowed to take a selfie a day to track her progress – and it’s astonishing. She told the Caters News, “365 days of selfies was one of the first things I did, it started during my mourning period – the first one was horrible; I looked so lost and broken.”

A year after she began exercising, Justine has lost 124 pounds. Her Instagram reveals just how far she’s come. But she wasn’t just exercising – Justine also drastically changed her diet: she’s gone from eating three waffles with maple syrup in the morning to egg whites with avocado, as one example. Justine’s story is a powerful reminder of perseverance and the strength of willpower. We’re excited to see the rest of her journey.