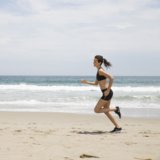 When I set my eyes on participating in my first triathlon seven years ago, I hadn’t run just to run since 8th grade track when I ran the merciless 400 meters – one loop around the track at a painful semisprint speed. Biking and swimming were already some of my favorite pastimes, making a triathlon the perfect fitness goal for me. I just needed to start running. And I was inspired! I had read countless and varied tales on the positive power of running and its life-changing qualities. I was confident I could learn to love running by following in the footsteps of my new personal heroes who had dropped hundreds of pounds, beat depression, and tamed addictions all by lacing up their sneakers and hitting the road. Easy peasy. We were all born to run, right? I began my relationship with running using the Couch to 5K program. I can tell you that although the affair was very sweaty, the love connection was tenuous at best.

A good majority of runners will admit to having a love-hate relationship with the activity. They will confess it’s not easy. They will tell you pain is temporary, but the high afterward is marvelous. I never got high and I never found the love. My relationship never evolved beyond the spectrum of moderate tolerance to hate. And I gave running a solid chance to win my heart while it was making it stronger. I have done a handful of tris, run 5Ks for charity and for PRs (personal records), participated in the San Francisco Nike Women’s Half-Marathon. I was the slowest member on the kick-ass relay team in the 198-mile Hood to Coast stage race in Oregon – cruising through downtown Portland at midnight was a highlight of my running career. I thought love would come with repetition, but mostly it created a sense of dread.

This Summer, running and I hit an all-time low. It started out innocently enough with my decision to run another half-marathon. After all, I had routes for all those long runs mapped out and a training plan I liked – it seemed a shame to let all that knowledge go to waste. With the almost daily intention of running a simple three-miler, I would set my alarm to start my day with a run. And every morning, when the alarm buzzed, I easily convinced myself to stay in bed with the intention of running later in the day. But I didn’t run later in the day. And I didn’t run the next day either. I also didn’t do anything else – I was mentally saving myself for that dreaded short three-mile run.

During this phase of avoidance, my body began to ache. My joints and muscled missed moving. And although I wasn’t waking up early to run, I was lethargic. So I did what seemed unthinkable, I told running we needed a break. I got back to the strength-training, biking-, hiking-, dance-aerobics regimen I actually enjoyed. After a couple of weeks of rocking my sweat sessions, I realized it was time and that I would not be seduced by the benefits of running again – you can’t reap the benefits if you don’t put in the miles. So I officially broke up with running. I went public about it and probably talked to too many disinterested people about how I left this unsatisfying relationship.

It’s been good: running hasn’t missed me and I haven’t missed running. Sure I do some running-inspired moves like high knees and butt kickers as part of my cardio warmup, but it feels like a clean breakup. Everyone in moving on, and most importantly I am moving!

Working out is hard, and clearly finding something you love to do is key – mere toleration doesn’t work. There are so many ways to get strong, break a sweat, and burn calories. The benefits of regular exercise are proven, so don’t trap yourself in a bad relationship. Put yourself out there. Try new things. You can and will find something you love.