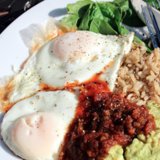 The following post was originally featured on fANNEtastic Food and written by Anne Mauney, who is part of POPSUGAR Select Fitness.

Now that it’s the New Year, I thought it was timely to share a blog post about some of the biggest nutrition myths floating around out there – and why you shouldn’t believe them.

1. It’s healthier to eat egg whites rather than whole eggs.

Actually, the yolk is where a lot of the nutrition is! Most people don’t know that the yolk contains over 40 percent of the protein in a whole egg – and more than 90 percent of the calcium, iron, and B vitamins. It also contains all of the egg’s fat-soluble vitamins (A, D, E, and K). Plus, that extra fat will help to keep you full and satisfied for longer than you would be with just the whites! But what about cholesterol? Research is showing that cholesterol in food has a much smaller effect on blood levels of total cholesterol and harmful LDL cholesterol than we thought. In fact, moderate egg consumption (defined as one per day) has not been found to increase heart disease risk in healthy individuals. (sources: 1, 2) The 2015 Dietary Guidelines (which finally just came out last week) have also dropped the recommendation to limit cholesterol, which I was happy to see.

2. Choose fat-free or low-fat dairy and other products.

It drives me crazy that many people still think (and the Dietary Guidelines are still recommending) fat-free and low-fat dairy as a healthier option that full fat. During the 1980s, there were a couple major reports that came out that would alter the way Americans ate and kick off the low-fat and anticholesterol craze that I’m sure many of us remember well (and might still be abiding by). In these reports, decreasing saturated fat and dietary cholesterol were labeled as the single most important changes that one could make to improve their health, which translated into a national food production frenzy to create low-fat diet products. Everyone started eating eggs without the yolks, low-fat crackers, low-fat cookies, low-fat dairy products, low-fat everything. But something strange happened – Americans continued to get heavier than ever, and their overall health wasn’t improving, either.

I could go on and on about why this is (and you can read more about it in scientific terms in a guest post I wrote for my friend Kath on the topic of why it’s good to eat more fat), but let’s just focus on one of the big points with the fat issue for now. Here’s the thing: when a product is artificially made low fat or fat free, it won’t be as satisfying, due to the absence of fat, which keeps you full longer. This can lead to overeating because you never feel satisfied. Also, artificially fat-free/low-fat items often have sugar and other fillers added – or you’ll add more sugar yourself because it doesn’t taste good without the fat. For example, think of having a fat-free latte. It needs a fair amount of sugar/syrup to taste good, right? Same with fat-free yogurt. Next time, if you are a dairy fan, try a full-fat latte or full fat yogurt – you’ll notice it’s much more satisfying and you don’t need nearly as much sweet to make it good. Same thing goes with products like peanut butter – go for the natural full-fat version to skip the additives and sugar and up the satiety factor.

3. Granola and yogurt is a healthy breakfast.

Granola and yogurt can certainly be a healthy choice, but it depends on the products being used. Often granola and yogurt are really just dessert in disguise due to the large amount of sugar found in many brands! Look for a plain, full-fat Greek yogurt for a protein punch without added sugar, and aim to choose a granola that has less than 10 grams of sugar (at a maximum) per serving. Then, add fresh fruit for sweetness instead and some nuts for healthy fat and staying power!

4. Multigrain and wheat breads are a healthy choice.

Look for 100 percent wheat or 100 percent whole grain on the label, because unless 100 percent is noted, it’s likely just white bread with a tiny grain of something added – or with caramel color added to make the bread look darker. Even better, check that ingredient list. Is it short and full of things you recognize as real food? If not, put it back on the shelf. I usually go for sprouted grain breads – better real food ingredient lists!

5. Potatoes are bad for you.

While their orange cousins have been hanging out in the nutrition spotlight, white potatoes have gotten a bad reputation over recent years for being essentially empty carbs. Not true! White potatoes are packed with fiber, which helps keep you regular and aids in feeling full. They also have more potassium than sweet potatoes! A USDA study of potatoes recently found levels of phytochemicals that rival the amounts found in broccoli, spinach, and brussels sprouts. Eat up! I like having them roasted. 🙂 (See also: Garlic Herb Roasted Veggies.)

I wouldn’t suggest grabbing a regular soda in its place (clearly real sugar isn’t good for us, either, especially in large quantities), but rather decreasing intake of diet sodas as well as other artificial sweetener sources, like sugar-free gum and other sugar-free products. Another thing: artificial sweeteners might be making your stomach hurt.

7. Coffee creamer is a healthy alternative to half and half or whole milk.

Take a look at the ingredient list on that coffee creamer – it’s usually packed with trans fat (here’s what trans fat is and why you should avoid it) and all sorts of other not so great additives. Here’s the ingredient list on a vanilla coffee creamer: sugar, partially hydrogenated vegetable oil, corn syrup solids, less than 2% of sodium caseinate (a milk derivative)**, dipotassium phosphate, natural and artificial flavor, mono- and diglycerides, sodium aluminosilicate, salt, carageenan.

Related posts
Is Broccoli the Secret Fountain of Youth? A New Study Says Yes
October 31, 2016
A Guide For Detoxing After Halloween
October 29, 2016
10 Things Every Woman Should Do to Help Prevent Breast Cancer
October 10, 2016
Researchers Find an Exciting Link Between Wine and Alzheimer's Prevention
September 13, 2016
Can Exercise Counteract a Night of Drinking? A New Study Says Yes
September 12, 2016
Here's How to Hit 10,000 Steps a Day, Even If You Work a Desk Job
September 9, 2016
Train With Us
Book Your Complimentary Training