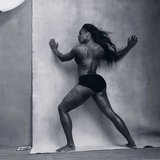 Serena Williams earned a spot on the much-anticipated 2016 Pirelli calendar, alongside 12 other amazing women, including Amy Schumer, Yoko Ono, and Patti Smith. The women were selected for their social, sporting, cultural, artistic, and professional accomplishments, rightfully recognizing Serena as currently the No. 1 women’s tennis player.

The 43rd edition was created by photographer Annie Leibovitz, who shot the athlete’s topless and powerful photo in the series of black and white portraits.

“When Pirelli approached me, they said they wanted to make a departure from the past,” said Annie. “They suggested the idea of photographing distinguished women. After we agreed on that, the goal was to be very straightforward. I wanted the pictures to show the women exactly as they are, with no pretense.”

This creative choice proved to be the best direction, as Serena’s strength and beauty is undeniable in the raw April shot. The tennis powerhouse is equally as excited as we are that she’s featured in the upcoming year’s calendar, evident in her tweet from September.

Guess what?? I am so happy to be part of the next #PirelliCalendar shot by @AnnieLeibovitz !! #thecal
– Serena Williams (@serenawilliams) September 18, 2015

While previous editions traditionally highlighted supermodels in risqué and nude poses, we love the shift toward celebrating other distinguished female icons for the upcoming year. Get ready for some major fitness inspiration all April long.