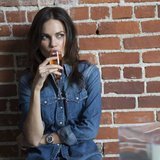 There’s nothing like a cold beer after a long run. Two new studies, however, show a close relationship between alcohol intake and physical activity, suggesting that exercise may even directly influence the amount people drink and when.

One of the studies includes research conducted by Pennsylvania State University, which looked at the lifestyles of 150 adult men and women from ages 18 to 75. Participants were asked to complete detailed questionnaires and to document their daily drinking and exercise activity using a provided smartphone app for three weeks. Volunteers continued to record their activity three additional periods throughout the year.

Results found that on the days people exercised more than usual, they also tended to drink more. Age, gender, and season didn’t influence these findings. This connection, however, did not mean that exercise causes heavy drinking; more often than not, participants primarily stuck to moderate intake.

Test subjects in the second study included lab rats that showed both exercise and alcohol increased reward-processing activity in the brain. Although individually, exercise and alcohol did not have the same effects on the rodents, the high proved to be stronger when done together. Therefore, a possible explanation to how the two are interconnected could be that we want to strengthen and prolong our post-workout highs with a drink afterward. Alternative answers could include that people are more motivated to exercise after drinking because of calorie guilt and that those who work out together are more likely to socialize outside the gym or off field.

Related: What’s the Deal With Alcohol and Ibuprofen?

Although results from both these studies aren’t a cause for worry, they might make you more aware of that extra glass you’re more likely to pour the night of your workout. So keep calm and drink on (in moderation).