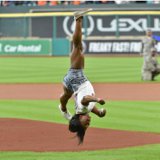 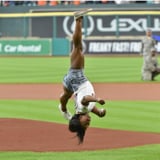 throwing out the first pitch for the Houston Astro’s ⚾️✨ @astrosbaseball Thank you so much for having my family and I!

If you thought Simone Biles’s gymnastic skills couldn’t get any better, think again! The 19-year-old athlete threw the first pitch at the Houston Astros’s Fourth of July baseball game, but she wouldn’t be the gymnastics goddess she is without giving it an acrobatic flair, would she?

Simone used the moment to show off her acclaimed talents by landing a hands-free aerial flip and then gracefully throwing the baseball straight to the home plate. The only words we have left to describe watching her first-pitch moment is wow. Check it out below to see for yourself.

.@Simone_Biles getting fancy with her #Astros first pitch. Love it! #USA pic.twitter.com/bPW43fX5SZ