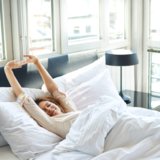 People suffering from undiagnosed respiratory health issues or muscle disorders know that getting a good night of sleep is impossible. Our friends over at Self share a great example of how much of a difference waking up rested actually makes.

I was recently diagnosed with severe obstructive sleep apnea, a condition that causes my airway to collapse during sleep. It effectively cuts off my airflow, which disrupts my rest and restricts my oxygen intake. Fun! I was also diagnosed with periodic limb movement (PLM), a disorder that causes frequent muscle movements during sleep, most commonly the flexing and releasing of leg muscles.

When I did an overnight sleep study, the sleep specialist said my arousal index – a measure of how many times per hour something was sending me back to a light stage of sleep, and not nearly as sexy as it sounds – was 97. The respiratory therapist told me it was one of the worst numbers he’d seen in his 30 years of doing sleep studies, and he was curious as to how I functioned on a daily basis. I guess I got used to being sleep deprived.

My sleep doctor put me on a low dose of Ropinirole (a medication used to treat Parkinson’s) for the PLM and prescribed a Continuous Positive Airway Pressurek (CPAP) machine to keep my airway from collapsing. It’s been a little more than a month since I started treatment, and there are eight ways my life has drastically changed for the better. That’s not even counting the long-term health benefits of getting good sleep!

When I went in for my sleep study, they woke me two hours in to tell me I was a damn mess. Then they put me on the CPAP machine and told me to go back to sleep. That first night, I got five hours of shut-eye with the CPAP machine. Even though I’d gotten 10 hours without it the night before, the CPAP sleep was far superior. After years of not being rested, it was like when you clean smudge off of glasses: you could see everything OK before, but once the smudge is gone you realize how much you were really missing.

I’m not as irritable as I used to be. I wasn’t Gordon-Ramsay-in-Kitchen-Nightmares-grouchy, but there were times when I was working with a short fuse. That’s no surprise since another symptom of a chronic lack of sleep is – you guessed it – bad moods.

3. My anxiety seems to be less severe.

I suffer from Generalized Anxiety Disorder. Wouldn’t you know it, sleep disorders absolutely exacerbate GAD and GAD absolutely exacerbates sleep disorders! Talk about a vicious cycle. My GAD isn’t gone, but it is noticeably less intense now, as if my rested mind is much more resilient to the disorder. I can, for the first time in a long time, more easily acknowledge, accept, and move on from anxious thoughts and triggers. Then I replace them with positive ones, which is a staple of GAD coping mechanisms.

4. Waking up throughout the night is a distant memory.

It wasn’t uncommon for me to wake up five or six times a night. I’m not talking about a few second of consciousness and then back to dreamland. I was physically getting up and out of bed five or six times. Sometimes I’d take a warm bath in the middle of the night because my legs were kicking so severely from the PLM, but even more frequently I would get a glass of water because my mouth was bone dry from the sleep apnea. This past month was the first time in 10 plus years that I slept a full night without waking up once.

5. I don’t nod off in the middle of the day anymore.

Before, I was the walking embodiment of those 5-Hour Energy commercials. You know the ones: “Do you suffer from that 2:30 feeling?” I couldn’t get any work done in my office because the hum of the central air and the soft, overhead lighting would put me right to sleep. Now I can work in quiet places, and I don’t take naps. Sometimes I look at the clock and am surprised that I’m so alert when I’d usually be a heavy-lidded mess.

6. Seven hours of sleep is enough for me.

The National Sleep Foundation recommends seven to nine hours of sleep a night for anyone between the ages of 18 and 64. Where I used to aim for 10 or 11 a night, I’m consistently getting seven and still feeling more rested than I have in over a decade. Almost overnight, I reclaimed three to four hours of every day.

7. My morning commute is significantly safer.

About three months ago, I committed to a three-hour round-trip commute to work five days a week. Before treatment, my drive to work was a daily battle to stay awake. I tried everything including caffeine, loud music, sticking my hand out the window, and flexing my sphincter (don’t judge me – I saw it once on an episode of Morgan Spurlock’s 30 Days). Sometimes I’d get to work and sleep in the parking lot before I went in, and other times I’d stop and nap on the way. It was a legitimate problem. The CDC estimates that some 72,000 auto accidents a year are a result of drowsy drivers, and there are even federal guidelines that say you’re not medically fit to drive if you’re not treating your sleep apnea. Luckily, that’s not a problem for me. I can’t imagine going back to a life without my CPAP machine.

8. My snooze button doesn’t get as much love.

Before all of this, I would put my alarm clock across the room as a way of forcing myself out of bed in the morning. That worked for a bit, but eventually I was so exhausted that I would get up, hit snooze, and go right back to bed. Since starting therapy, I keep my alarm next to my bed. Even if I do hit snooze, it’s never more than once. Now that I’m actually getting good sleep, waking up and starting my day is no longer an epic struggle.

Check out more great stories from Self: