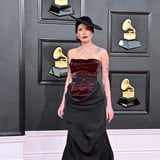 Halsey took to Instagram yesterday to share that they’re considering taking time off to prioritize their health. “I have been in and out of the hospital for the past few weeks dealing with some new challenges,” Halsey wrote on her Instagram Story on April 24, possibly referring to the endometriosis operations she had earlier this month. “Trying my best to keep things normal; Grammys, Coachella etc. But my body is putting up a strong protest.” Ultimately, the 27-year-old singer said their body was “demanding that I slow down or stop foreal this time,” especially so they could be in “the best shape” for their upcoming Love and Power Tour, which kicks off May 17.

“Chronic illness is a complex mystery,” Halsey continued. “If I am or have been MIA please don’t take it personally. I am doing the best I can under difficult circumstances.”

The post came just weeks after Halsey opened up about her recent endometriosis surgery, which was mere days before the 2022 Grammys. It was history repeated for the singer, who said they also had endo surgery before the 2017 Grammys. In their Instagram caption, Halsey wrote: “The last time I attended the Grammys was 2017 and it was 3 days after I had my first Endometriosis surgery. I walked the carpet with my stitches still in 😅 As luck would have it, I’m attending tomorrow for the first time in years and I had surgery again (you guessed it) 3 days ago. Only posting this to say, if you see me be gentle lol I’m fragile. Fragile but excited 🙂 🤍”

The post comments were filled with words of encouragement from celebrities and fans alike. Halsey later explained that they had to leave the Grammys before it ended, writing on their Story, “Not feeling super well, so I left early. Had to see BTS tho. Going to get pasta and sleep. Thanks for everything. Luv you all.”

Halsey didn’t specify the type of endometriosis surgery she had before the Grammys or whether the procedures she referenced in her April 24 Story were also related. Recovery time for endo surgeries can range from a couple days to several weeks, according to NYU Langone.

Halsey has previously been very open about their experience with endometriosis, “a disorder in which tissue that normally lines the uterus grows outside the uterus,” per the Mayo Clinic. They recently gave birth to their first child in July after sharing their pregnancy complications.

In a 2016 tweet, she detailed her journey toward diagnosis, remembering times when she was “doubled over backstage” in the middle of sets and was in so much pain that she would vomit or faint. “Finding out that I had endo was the most bittersweet moment because it meant I wasn’t crazy! I wasn’t a ‘baby’! I had every right to be feeling like the world was caving in,” Halsey wrote. If you think you’re experiencing symptoms of endometriosis, here’s how to spot the signs. The singer offered fans words of encouragement, writing, “Just know I’m here if you want to vent. I have managed to live a wild, incredible, unpredictable life with Endo, and I’m here for you!”

If any of my fans or followers have #endometriosis 💛 having a rough time today. laying in bed thinking of you. pic.twitter.com/LOQVn5BsSg

Here’s hoping that Halsey makes a speedy recovery and gets the rest they need.

Related posts
What a Roe v. Wade Overturn Could Mean For Birth Control
May 5, 2022
Why It's Crucial to Emphasize That Abortion Is Still Legal, According to Activists
May 4, 2022
9 Meaningful Things You Can Do to Support Abortion Rights Today
May 4, 2022
Should You Stock Up on Emergency Contraception in Case Roe v. Wade Is Reversed?
May 3, 2022
What the Leaked Roe v. Wade Opinion Means – and What It Doesn't
May 3, 2022
Why Am I Dizzy When I Wake Up?
April 30, 2022
Train With Us
Book Your Complimentary Training