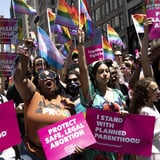 In response to the Supreme Court’s ruling to overturn Roe v. Wade on Friday, Planned Parenthood released a post-decision-day video titled “Force of Nature” depicting a storm rolling over America

The message is clear: keep your bans off our bodies.

Over the fading audio clips of Roe v. Wade news reports, the video opens with the lines, “We’ve all felt the storm coming; it’s been building for a long time. Sweeping across the country, destroying our freedoms. Now, the storm is here.”

Natasha Rothwell, an actor from “Insecure” and “The White Lotus,” narrates the video. The film shows a teenage girl moving within a dark house as thunder claps outside the door. Planned Parenthood does not mince words, with Rothwell ominously narrating, “They plan to steal far more than abortion.”

In a statement, Rothwell reminds us that generations of activists have fought for freedoms and won. “For decades, antiabortion supporters and politicians have worked to overturn Roe through voting restrictions, unjust laws, misinformation, and fearmongering,” she said. “Together, we will build on this legacy by lifting our voices and mobilizing in our communities to defend abortion rights.”

Directed by Sadé Clacken Joseph, the video is part of a $12.5 million media campaign that will run across all digital and streaming platforms. The caption on the YouTube video directs people to BansOff.org, a site that features useful information about abortion and ways to get involved in the fight for reproductive justice. Joseph released a statement on why they decided to run with the “Force of Nature” theme.

“There’s always a rainbow after every storm,” she said in a statement. “Making this video was cathartic, inspiring, and really emotional not only for me but for everybody involved. I hope this piece encourages us to walk toward the storm we find ourselves in today and not be afraid to stand in it, together.”

Planned Parenthood has made it clear it has no intention to give up the fight to win back the right of choice: over our bodies, our lives, and our futures. Rothwell says, “We have always been a force to be reckoned with, and we won’t back down now. We will be fearless.”

Related posts
What to Know About Valerian Root and Its Potential Benefits For Sleep
June 30, 2022
Why Your Vaginal pH Level Matters, According to OBGYNs
June 30, 2022
WHO Criticizes SCOTUS Ruling on Roe v Wade: "Safe Abortion Is Healthcare"
June 30, 2022
Now May Be the Time to Delete Your Period-Tracker Apps, Some Experts Say
June 30, 2022
Lauren Conrad Shares Experience With Ectopic Pregnancy Following Roe v. Wade Decision
June 30, 2022
What Is Pancreatitis, and What Causes It?
June 29, 2022
Train With Us
Book Your Complimentary Training