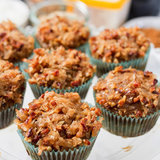 The following post was originally featured on Eating Bird Food and written by Brittany Mullins, who is part of POPSUGAR Select Fitness.

I didn’t realize it until today, but I haven’t posted a single cupcake recipe here on EBF. Eight years of blogging and no cupcake recipes to show for it. I guess it makes sense considering this is a healthy eating blog, but still!?! Well that’s about to change because I have a sweet treat to share with you today.

Surprise – it’s an oatmeal cupcake recipe! One that’s crazy delicious, vegan, gluten-free, and made with OATS. Of course I had to put oatmeal in them . . . this is a healthy living blog after all. Plus, oatmeal can be decadent. Let me show you how!

I’ve seen plenty of recipes for oatmeal muffins and oatmeal cookies, but never oatmeal cupcakes so I found this recipe for old-fashioned oatmeal cake and decided to use it as inspiration.

I wanted the recipe to be gluten-free and vegan so I used gluten-free all purpose flour, flaxseed eggs, and Earth Balance Buttery Spread instead of butter. I’ve used Earth Balance products many times before and have been impressed with the taste and flavor. They make vegan baking a breeze! While I’m not vegan I know many of you are and I like to provide vegan options whenever possible.

These cupcakes are pretty much the bees knees. Sans honey, of course.

The oatmeal cake portion is dense and moist, similar to coffee cake or a quick bread, but the best part is, by far, the broiled brown sugar coconut pecan topping. It’s kind of sticky and gooey, but sweet, crunchy, and full of coconut flavor at the same time. I gravitate to baked goods with crunchy toppings so it’s basically like cupcake perfection in my book.

The cupcakes have plenty of sugar, but they’re not overly sweet. Plus they have oatmeal so they’re semi-healthy and dare I say breakfast-worthy? I certainly wouldn’t feel bad about having one as a morning treat or serving the whole batch to a crowd for brunch.

I took one for the team and tested it – the oatmeal and brown sugar flavors do indeed make a lovely pairing with coffee.

Ready to try them for yourself? Here’s the recipe: