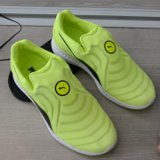 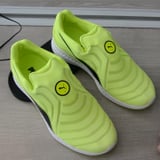 On the heels of Nike’s announcement about its HyperAdapt 1.0 sneakers, Puma has finally revealed its own self-lacing sneakers, the Autodiscs. The brand previewed the self-lacing sneakers in 2015 when Usain Bolt tried them on in a Twitter video, however, information about the shoes had been pretty scarce until now.

Engadget got an exclusive look at the kicks and answered everyone’s main question: how exactly do they work? Well, the Autodiscs have neat, built-in motors hidden in the tongue of the sneakers. The motor is triggered with the push of a button that then loosens or tightens the hidden laces inside of the shoe.

What’s more, the owner’s preferred tightness can be saved on the shoe’s corresponding smartphone app. To charge your Autodiscs, simply place them on their special charging mat.

While we’re already sold, sadly, the Autodiscs aren’t officially available. According to Engadget, only 50 pairs have been made and Puma has yet to announce when they will be open to the public . . . and for how much.

Watch the video demonstrating the futuristic sneakers above.

Related:
Are You Wearing the Right Shoe For Your Workout?
An Ultramarathoner Shows Us How to Pick the Perfect Running Shoes